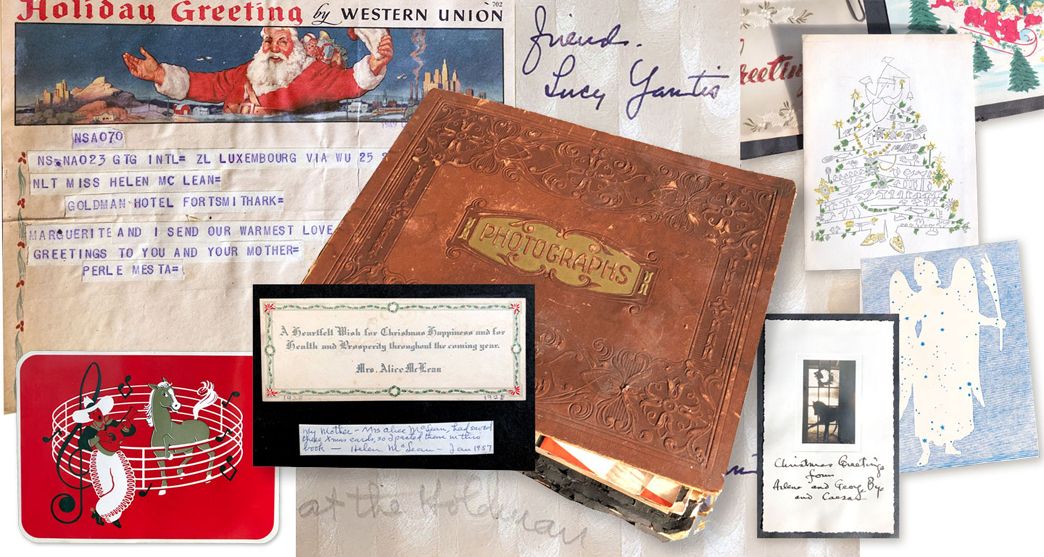 Helen McLean of Fort Smith mounted the Christmas cards she and her mother, Alice, had saved from 1928 to the 1950s into an overstuffed scrapbook. As Helen did not have children, their holiday scrapbook passed through antiques sales to its current owner, editor Lynn Wasson. Although most of the cards are signed by people long gone, its pages still give pleasure. There are life stories to be found inside, along with a glimpse of popular, 20th-century commercial art.

It’s a thick and crumbly album, filled with Christmas cards saved from the 1930s to the 1950s by Alice McLean and her daughter, Helen McLean. It was collected by antiques dealer Wanda Wasson, my husband’s mother. Although the McLeans and Wanda are gone, this album of Christmas cards still tells many stories.

First, there is the beauty of the cards themselves. With four decades of cards in sequence, the cards are examples of formal, engraved printing on high-quality linen paper and later, thrifty, two-color printing.

Some greetings were sent as telegrams. Many are as restrained and tasteful as social calling cards. Others are actual photographic portraits, made and hand-printed by the photographer, onto heavy, embossed linen stock. These cards can be also appreciated by carefully handling them. It is rare, today, to feel paper this finely made.

The next layer of meaning is in the styles of art of the cards. Seen chronologically, it’s a survey of American commercial art and illustration. Fads and popular culture are seen. The illustrations are not the same imagery popular now, but are of holiday subjects. Makers seemed to embrace tradition or rush out the latest materials, such as celluloid.

Finally, there are the long-gone people who sent and received these colorful messages during the season of friendship and warmth. Many lives are hinted at here. Some senders have chosen cards that reflect their personalities and standing. There are several from a Midwestern farming family, sharing an aerial photograph of their many barns, white-painted wooden fences and bounteous fields of corn or wheat.

Signatures on the cards include prominent names, national and local. Alice and Helen, due to the bequest of Mr. McLean, resided year-round in different hotels. While in Fort Smith, they lived at the Goldman, the finest address on Garrison Avenue.

When in Oklahoma City, they took rooms at the Skirvin Hotel. The daughter of the owner of the Skirvin (restored and again, a destination hotel today) was Perle Mesta (née Skirvin), who came to be known as “The Hostess with the Mostest” while living in Washington, D.C. in the 1940s. Her lavish parties were a salon for politicians and the powerful.

Mesta (1899-1975) was nationally known as a socialite and hostess. She was appointed U.S. ambassador to Luxembourg from 1949-53. Widowed in 1925 after a short marriage to a steel magnate, she was sole heir to his $78 million fortune. It paid for a lot of parties!

Playing bridge and paying social calls was also the lifestyle of the McCleans, living on the inheritance left them by their husband and father, the late John B. McLean. Their wealth was more modest than Mesta’s. But each year, Mesta sent a Christmas telegram.

Helen McClean was a lifelong friend of Bess Truman, wife of President Harry S Truman. Their families had been neighbors, in Missouri, before Bess married Harry.

A local club and Mrs. Truman’s bridge club of Independence, Mo., traveled to play cards with one another. The former president and wife drove their own car to Fort Smith for social visits. (Imagine this happening today.)

Naturally, the ladies received greetings from John A. England, manager of the Goldman.

There are cards from Mrs. Ed Ballman, mother of philanthropist Ed Louise Ballman, as well as from Lucy Yantis of Fort Smith. Local businesses and banks where the ladies traded acknowledged customers at Christmas, often with a special holiday letterhead.

Sweetest of all are tiny,  hand-written notes, on lined paper, still tucked into the cards or envelopes. They carry personal news of birth, marriage and death of friends.

Alice McLean died in 1954. Her daughter, Helen, lived at the Goldman Hotel until near her death in 1979, at the age of 88. A brother, Howard, died before Helen. Some readers may have known the McLeans. Your recollections would be welcome.

From looking at the Christmas cards and notes they carefully saved, it’s clear that the McLean ladies cherished their friends, whether notable or ordinary.

Christmas Card Album tells stories, still
Alice and Helen McLean, mother and daughter, saved their Christmas cards from the 1930s through 1950s.
The album's pages are pasted with greetings
The McCleans saved cards from the 1930s to the 1950s.
Always modern - George T. and Arlene Bye's cards are noticeably different
Bye was literary agent to Eleanor Roosevelt, Charles Lindbergh, Frank Buck and many others. His and the McLeans were friends in Kansas City, Mo. before his fame.
Perle Mesta was a celebrity and friend
Telegrams, not cards, came from 'The Hostess with the Mostest'.
Prospering in the heartland
The Frederick P. Schell family's hand-made cards include an aerial look at their farm and a fine draft horse, somewhere near Kansas City.
If one has traveled to Australia in 1948, do let everyone know.
Its envelope has a gold-embossed address: ?Park Hill? 8159 Hollywood Boulevard, Los Angeles. Its on the market today, near the Chateau Marmont, for seven figures.
The wittiest correspondent: Love Grant of Fort Smith
A Fort Smith attorney sent holiday letters through the war years with a recurring joke.
Love Grant, 1947
Grant's humor and affection for "Ma" is consistent.
Love Grant, 1948
Friends must have anticipated Grant's sweet and funny cards.
Love Grant, 1949
Grant refers to his wife putting together an album with a pun on the atomic bomb.
A family through the war
The earliest card in this series, now lost, shows a mom and two babies with a portrait of dad in uniform hanging behind them. However, their tribe increases and daddy obviously came home!
A card from their hotelier, John A. England
Each year there is an understated greeting from the well-known manager of the Goldman Hotel, the McLean's Fort Smith home.
Hometown friends
A card from Lucy Yantis of Fort Smith.
Bess Truman was a lifelong friend
The McLeans were friends with First Lady Bess Truman and with her bridge club members.
New materials
This see-through, celluloid or plastic card must have been the very latest.
1947 Post-war exuberance
Santa pedals America into the New Year
A singing cowboy card
Pure Americana
Early photo of Helen McLean
Found online, here is Helen, composer of the album, probably at her First Communion. She was born in 1887.