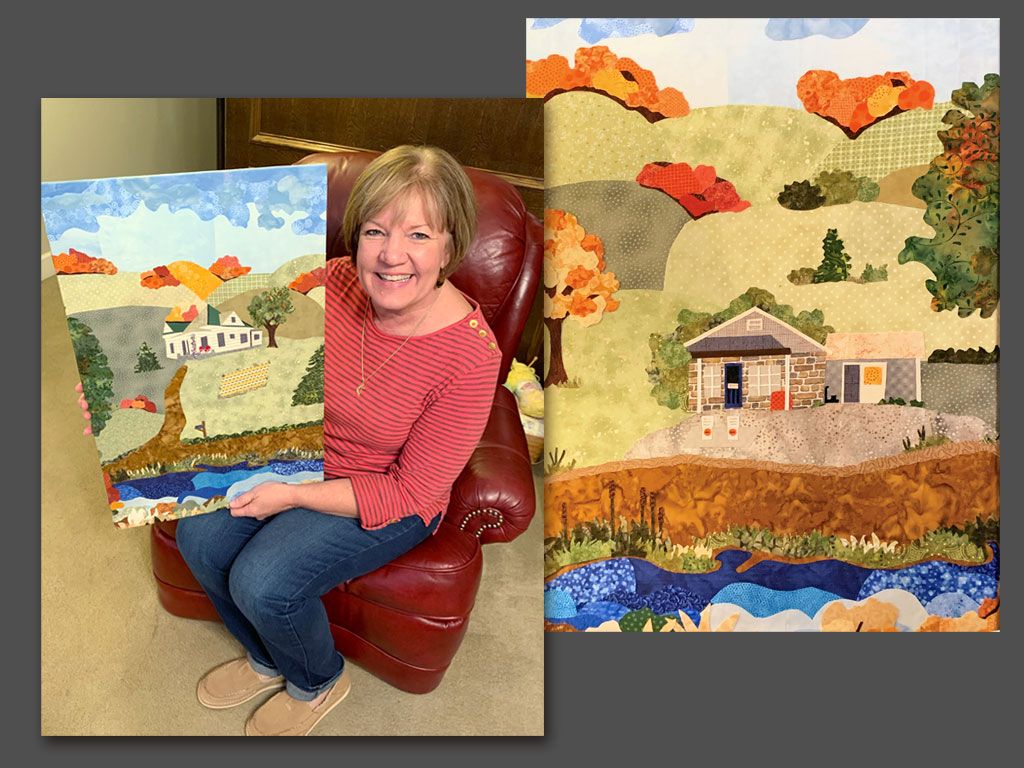 Piecing together the past

Where there’s a will, there’s a way could certainly be the motto of Fort Smith resident Sheila Humphrey. Years ago, she was intrigued by a piece of art in a friend’s home and something special was sparked in her imagination.

“I fell in love with it,” she recalled.

Sheila was so enamored with the fabric artwork, that she first tracked down the artist, hoping to find something that would work in her own space. However, no such piece existed, and she really had a specific vision on which she was not ready to compromise.

“I just couldn't get the picture of what I wanted out of my head and didn't know how to convey it to another person,” she said.

That’s when Sheila – an avid seamstress, but also a self-proclaimed “non-artist” – decided to tackle the project. All she really knew at the time was the piece would be more meaningful if she made it herself and she had a clear vision. She also took the decor of her home into consideration and decided, with her sewing background, fabric would be the most appropriate medium to use.

“I have literally had this in my brain for 20 years, but I had to wait until I retired,” the former teacher laughed.

Getting started proved to be no easy feat. She had no idea how to create the piece in her imagination, so she turned to the internet for help. While YouTube tutorials can be found on everything from changing the oil in your car to applying eyeliner, the “how to” videos she found about creating fabric art were not very helpful. The finished products never resembled the creation she envisioned.

That’s when she enlisted the help of her friend, Kim Been.

When Sheila told Kim about her idea, she was interested in trying to help. She recalls the conversation:

“I was so excited to have a positive reaction from someone instead of the familiar blank stare,” she laughed.

The ladies searched the internet for countryside photos.

“It was good to have something to look at. We had a color one and a black and white one blown up so we could cut one up – we are amateurs!” Sheila said. “I was so glad Kim wanted to do one, too, when I told her about it. We agreed we needed each other to brainstorm.”

Now working as partners on this journey, Shelia and Kim set out to create their first piece. They started with a random picture they liked, with the intention of making more personally meaningful pieces if the first attempt was successful. It took about a month, forming it entirely out of fabric that was cut and ironed on using a soft fuse product. Needless to say, working together and figuring it out as they went along, they were successful.

It was not long before Sheila was creating two more works of fabric art with a much more personal subject matter. One depicts family landmarks from her father’s side, including the Gulf gas pumps and the grocery and feed store owned by her grandfather on Highway 23 in the little community of Friendship between Caulksville and Booneville. Sheila’s grandparents owned the store for 42 years and she has many fond memories of spending time there as a child.

The other­­­ more sentimental piece represents Sheila’s mother’s side of the family. It includes the home in Branch where her maternal grandparents, McKinley and Gussie Shelby, raised their family of 10. She said wonderful memories flooded her mind as she worked.

“My goodness, we had fun in that house! There are 20 first cousins and we would spend summer vacations there together,” she said.

She recalls watching her grandmother can fruits and vegetables, helping her grandpa in the garden and learning to love the Cardinals.

“Grandpa was an avid Cardinals fan and everything stopped when a game was broadcast on the radio,” she said.

These precious memories were the driving force behind the creativity and determination she poured into her second and third works of art. As much as she enjoyed creating her first fabric piece, Sheila said the other two are the ones that bring her the most joy. A sentimental person, these creations are priceless reminders of her family’s heritage.

Perhaps another attribute one could use to describe Sheila is humble.

“I am not an artist. I am just stubborn and wanted to make the picture in my head a reality.”

Her humble attitude also is evident in her desire to give credit to her friend Kim and the invaluable role she played in making this project come to life. Sheila is thankful to have found the courage to act on her idea, but recognizes wholeheartedly that it might never have happened without her friend’s willingness to embark on the mission with her.

Sheila’s project idea was a large undertaking, to say the least. Led by her desire to create something truly unique, she enlisted the help she needed and jumped in head first, learning as she went along. It was pure heart that carried her vision to fruition and many will enjoy the beauty of her labor of love for years to come.

The three panels hanging together.
The center is the artists' first effort. The side panels are family-related.
Sheila Humphrey
Detail from one panel
Work in progress
Kim (left) and Sheila documented their progress while creating their first fabric art pieces.