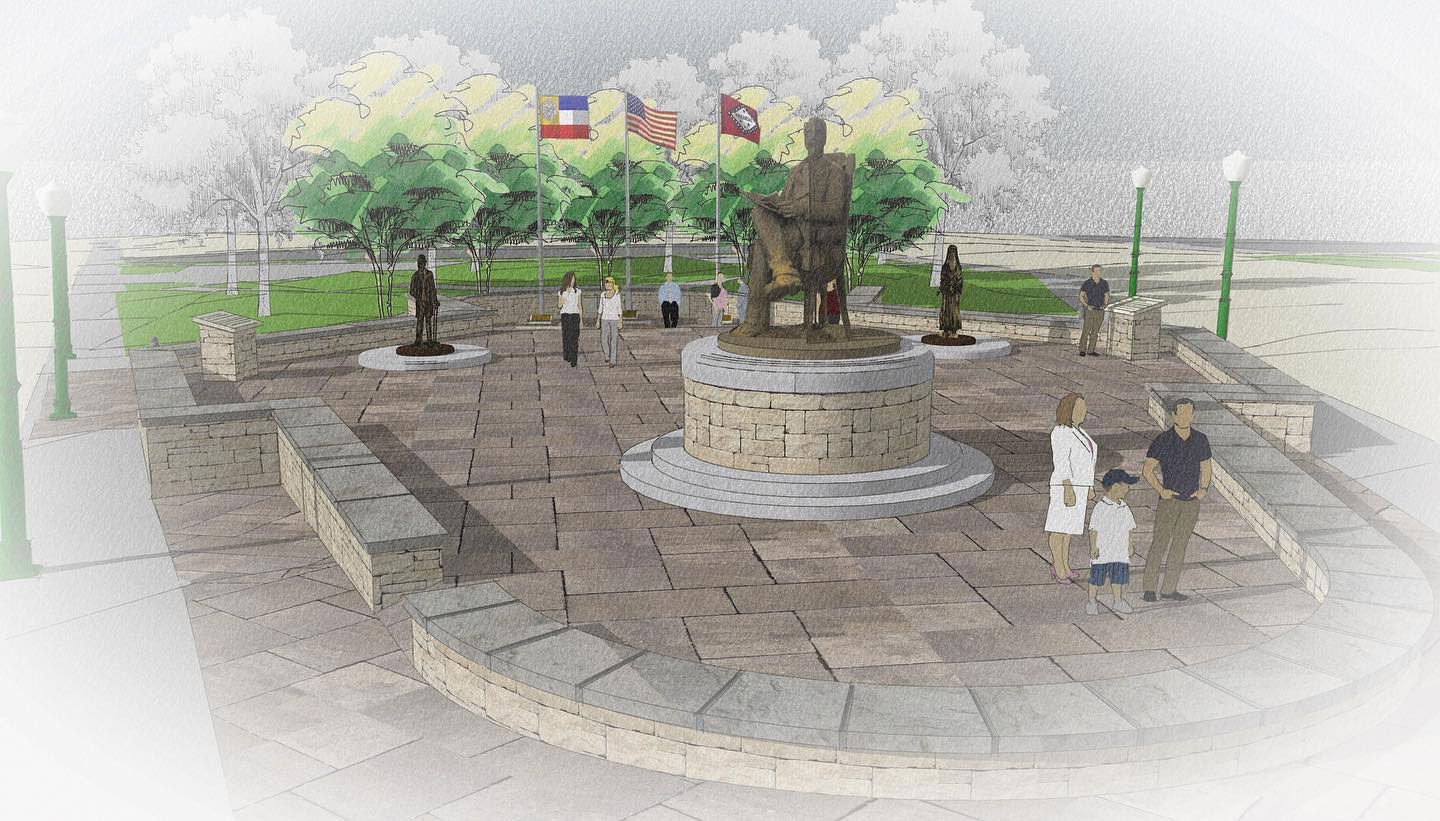 Update: Gateway Park will be dedicated Oct. 17. Construction is well underway at the highly visible spearhead of downtown Fort Smith at Gateway Park, where Garrison Avenue and Rogers Avenue meet. This triangular area is becoming an intentionally designed entry to the city. It is a project of 64.6 Downtown funded by donations, with the cooperation of the City of Fort Smith.

Each element of Gateway Park is thoughtfully imbued with local significance, from the site design by Studio 6 Architects, the selection of the three bronze figures and even its stonework and brick.

Individuals and organizations can purchase custom bricks to be installed into the sculpture plaza, as was done at the nearby monuments of Deputy U.S. Marshal Bass Reeves and Gen. William O. Darby.  Aug. 15 is the deadline to order memorial bricks, inscribed with three lines for $100 or six lines for $250.

As a purposeful echo of history, original curbstones removed for street alterations have been preserved by the City of Fort Smith for appropriate re-use or restoration.

Craftsmen at Ibison Stone in Hackett, Ark. are shaping the old curbstones now to the specifications of the architects’ site design.

Almost certainly, the quarry was the source of some of these curbstones, taken from massive sandstone formations in the area by Asa Clark, the earliest local stonemason on record the 19th-century. Owner Mark Ibison is a third-generation operator in the south Sebastian County stone deposits, in a custom stone business started by his grandfather and worked by his relatives. Ibison toured architect Shannon Reith and John McIntosh of 64.6 Downtown to make decisions and selections of the preserved curbstones and other stone stonecutters will prepare for the park.

Sculptor Spencer Schubert of Kansas City, Mo. revealed previews of the three bronzes he is creating for the park in a December unveiling at Propak, Inc.

In the center is Judge Isaac C. Parker. A champion of public schools, John Carnall, newspaper publisher and businessman is the second. Sister Mary Teresa Farrell, one of the original Sisters of Mercy to immigrate here from Ireland, is the third, represents the early establishment of health care.

Justice, public education and health care are the foundations of a free society and successful city. The small donation of purchasing a brick invites a number of people of present-day Fort Smith to endorse the ideals represented by these three citizens of the past and contribute to the future.