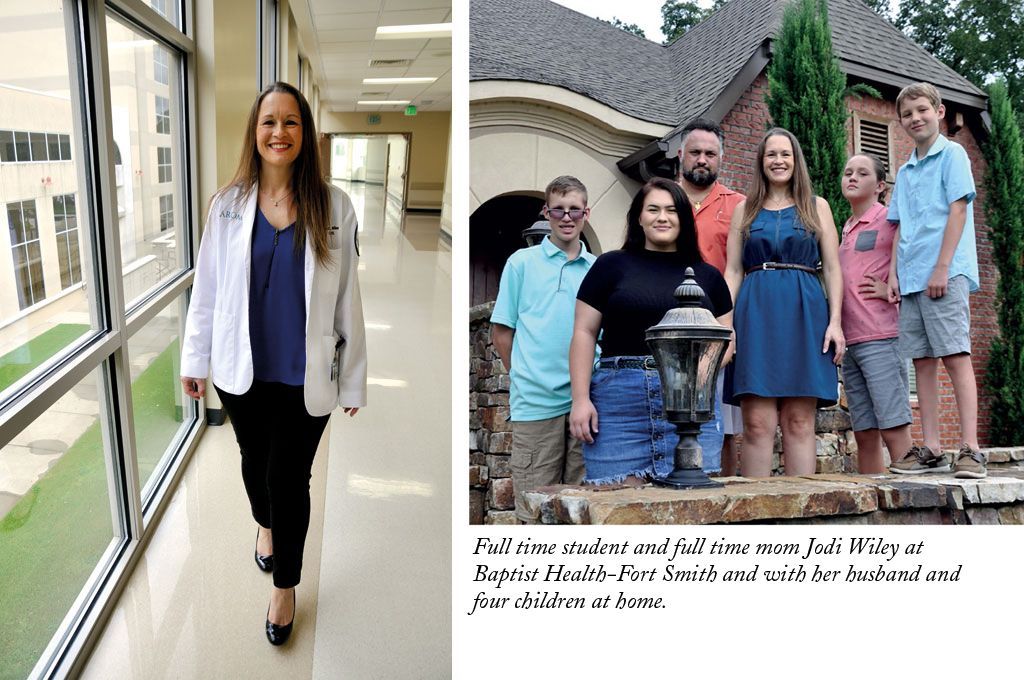 An ARCOM student may be a part of your healthcare team

First the first time since 2017, the inaugural class of students of the Arkansas College of Osteopathic Medicine is not at Chaffee Crossing on their campus every day. Medical student Jodi Wiley and her other third-year classmates are in white coats, learning beside teaching doctors in nine area medical facilities. Wiley is currently doing a six-week rotation at Baptist Health, in general surgery. She’s studying under and observing Dr. C. Michael Gooden.

This is the first enounter for patients and some in the medical community with ARCOM students. Wiley says “everyone” at Baptist Health is extremely welcoming and helpful.

She is in her second rotation of this 2019-20 school year. She has completed four weeks with Dr. John Harper, geriatric medicine and internal medicine. After four weeks concentrating on surgery, she will next do a rotation with a pulmonologist. Students may choose four out of 13 blocks of rotation in different specialties.

With hardly time to look up from her studies, Wiley also wrangles four bright, active children who attend three Fort Smith Public Schools and manages to be a mom and a spouse. She is the oldest female member of her class. Although there are other parents and students near her age, she said, “I have the most children.”

Her husband operates his own business in Wichita, Kan. and comes home on weekends. Fortunately they had both served in the military – she in the Navy and Christian, her husband, in the Marines. They learned to roll with relocation. Christian was deployed to Iraq when she was carrying their first child – it’s her second marriage and third child – but was able to return home to attend his birth.

She feels lucky he’s such a great dad, although she was surprised to be bombarded with texts on a recent Friday when he had just gotten back to town and had lunch with their boys at Orr Elementary.

“My husband had apparently decided ‘we’re going to have a half-dozen more boys stay over,'" she said. “His attitude is ‘It’s no more trouble, it’s just more pizza.’”

She deeply appreciates Christian and is grateful to all her kids for their support during these intense med school years. “My kids are not perfect, but I do have the perfect children for this adventure,” she said. “A lot of people think that raising a family during med school is a disadvantage and I don’t envy people raising toddlers or newborns – hats off to them. But in your lonely dark moments of med school, my kids are sometimes the voice of reason. They encourage me,” she said.

With two kids playing basketball, one in both orchestra and band and her daughter in Southside High School theater, her schedule during years one and two was stressful, she said. She still must study during rotations, but is glad that “at least I don’t have to study so hard during basketball practice any more.”

When she was accepted to ARCOM, the family moved here from East Texas. Arkansas is not so different, she said, and she would be happy to practice medicine here, even in a more rural area.

“I love rural medicine and I love the idea of living in the sticks,” she said. “I grew up in a village in upstate New York – it wasn’t even an incorporated town,” she said. Although that opportunity is available in Arkansas, she’s impressed with second-largest city of Fort Smith. “It is the most convenient town I’ve ever lived in,” she said.

Students will find out that March where they’ve ‘matched’ to available residencies. It’s a day she daydreams about. “In med school - you don’t always feel the most confident. Sometimes I watch videos of Match Day at other schools,” she admitted. “It’s totally an event!”

Getting to third year and doing rotations is great, Wiley said. Directly giving and observing actual care to patients confirms that her lifelong desire to become a doctor was right for her. Starting in the Navy, she obtained a psychology degree and a master’s and had worked in the mental health field, but still held that ambition.

“I knew I was going to be 50 someday,” she said. “I wondered ‘am I going to be 50 and doing what I really want to do?’” She decided to try, even though it required returning to school for a few more pre-requisite courses to be eligible. She will be almost 46 when she fully becomes an M.D. and even given the hard work, is happy with her decision.

“I love everything about medicine,” she said. “Doctors are successful into their 60s and 70s – they don’t retire because they have to, they retire when they want to.” Whether or not she practices in Arkansas, Wiley said she will always support ARCOM and be proud to be in its first graduating class.