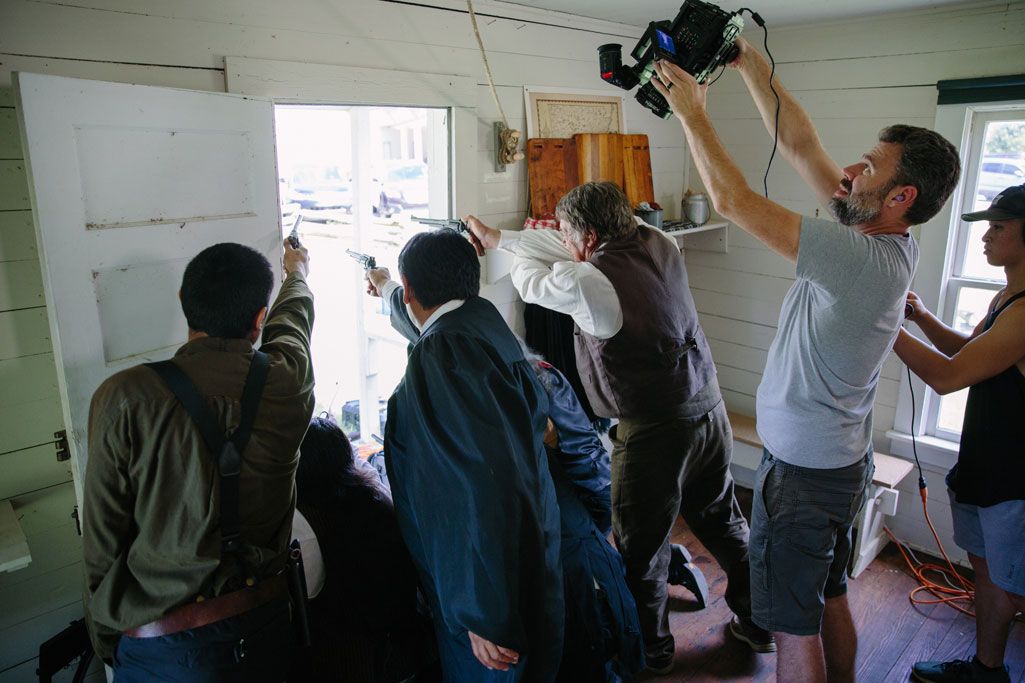 The Western District project moves from stage to screen

Last year, Goldsmith told this story, titled “The Western District,” as a live play and a small book. Now, he is making a documentary film and may someday create a feature movie or an episodic series also based upon it.

By making his process transparent, he has pulled in collaborators as diverse as fellow historical researchers, three casts of actors, donors and other local filmmakers and technicians. Related to his project, he co-founded the River Valley Film Society to find more local resources. By sharing with his UAFS students, he’s his own case study.

His documentary takes an even wider perspective on the core story of massive corruption related to the Federal Court of 1871-72  Fort Smith.

“The federal judge, U.S. marshal, deputies and even citizens concocted a series of schemes that defrauded the U.S. government of over $400,000,” he explained. “That’s the equivalent of $8 million in today’s money.” It took three federal investigations and Congress to stop the fraud. Dialogue for the play and documentary are taken straight from transcripts of the real-life participants giving their testimony in the investigations.

With the documentary, Goldsmith widens the scope to show the ripple effects of some of those same marshals, who were involved in the 1872 gunfight known as the Goingsnake Tragedy or Massacre. A posse led by deputy marshals rode to the Cherokee Nation to a heated, tribal murder trial of Zeke Proctor, a Cherokee. The posse carried a federal warrant to arrest Proctor, if acquitted, for wounding a white man at the time of the murder. The incident is viewed oppositionally by historians, boiling down, Goldsmith says, to “who shot first?” when deputies and Cherokees had a gun battle in the small schoolhouse.

Regardless of how it is viewed, the outcome was stark: 13 people were injured and 11 killed, eight of whom were deputy marshals.

The documentary depicts the Goingsnake shootout from the perspective of both the Cherokees and the marshals. Goldsmith used Greenwood, Ark., historic sites as the set, with more than 40 actors and 11 crew members working among complicated gunfight effects.

Goldsmith stays in constant motion to keep this project alive, a typical challenge for any production that isn’t financed in advance – few independent projects are. The Western District also has a GoFundMe campaign, partnered with the Fort Smith Historical Society.

In addition to writing and directing, he edits and produces scenes to use in funding pitches. He has acted as his own producer, until recently partnering with Amber Lindley, an award-winning, Arkansas producer and screenwriter who recently produced “Painted Woman.” Through her, he gained an associate producer who will do the specialized legal work. He’s building a professional production, one element at a time.

Goldsmith’s goal is to introduce the country and the world to the River Valley’s rich history, he said.  “Our history is America’s story!”

All production photos by Brenda Yelvington

Trial of Zeke Proctor
The murder trial, held in a Cherokee court, was divisive from the start. Production stills by Brenda Yelvington.
Federal posse were unwelcome attendees
Confrontation between federal deputies and Cherokees about jurisdiction over Proctor.
Who shot first?
Historians have opposite accounts. The film shows both perspectives. Photos by Brenda Yelvington.
Shooting in a tight spot
At the tiny courtroom, firing ensued in tight quarters.
Deadly consequences
Eight of the Marshals' posse and three Cherokees died in the incident.
Indie directors do what it takes
Goldsmith, in ball cap, points out that here he is standing in for a horse. Photos by Brenda Yelvington