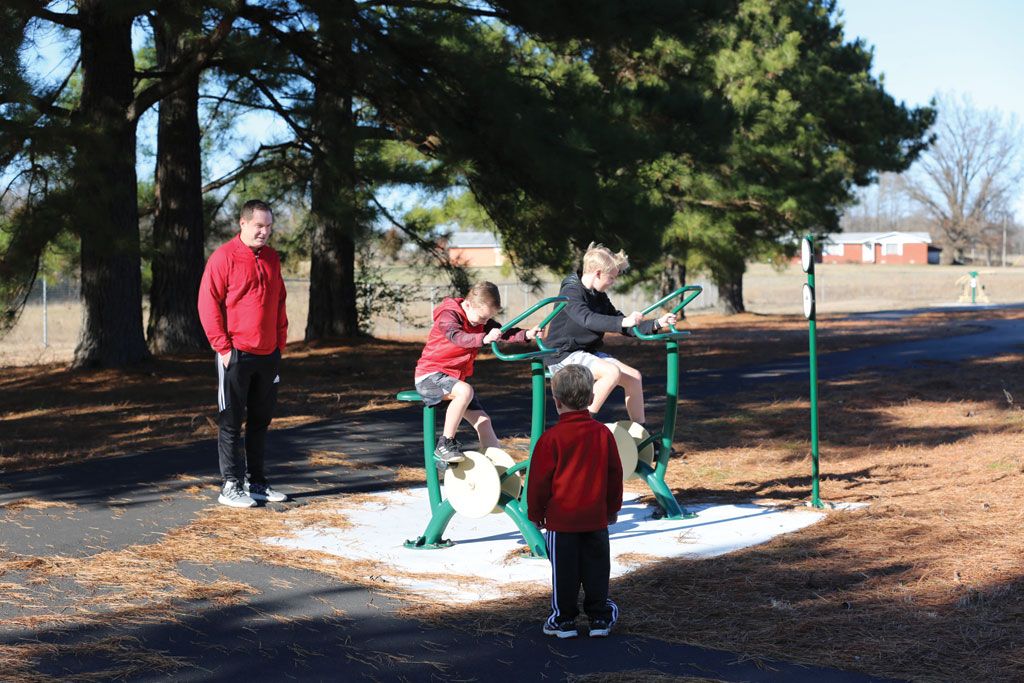 The Van Buren School District is doing its part to help get the community up and moving.

Thanks to several key partnerships, the district has spent the last several months expanding its existing campus trails system.

Funds awarded through the Joint Use Agreement grant program were used to build new trails with fitness stations at Tate, City Heights and Rena elementary schools, and a fitness park at Butterfield Trail Middle School. The trails and equipment are used by students and staff at recess, on breaks and during certain class periods. They also are open to the public during non-school hours, giving community members easy access to safe spots for exercising or enjoying the outdoors.

At Tate, the district coordinated with Crawford County leaders to construct a 1/4-mile-long trail with five fitness stations.

“This was a real team effort,” noted schools activities administrator Drew Cone. “Crawford County Judge Dennis Gilstrap and the county staff helped us tremendously. They poured an asphalt overlay on the trail, which not only helps ensure its longevity but makes it more user-friendly for everyone.”

The district teamed up with city leaders for the City Heights and Rena projects. This was not the first time Van Buren school and city leaders had worked together on a wellness initiative. The two entities have previously collaborated on projects at multiple campuses, including at King, Central and the Freshman Academy.

“The City of Van Buren has partnered with the Van Buren School District to address health-related needs in our community,” said Mayor Joe Hurst. “This partnership is changing perspectives and lifestyles in Van Buren. With a newly formed committee of school and city employees, increased efforts to gauge community needs in public forums and opinion surveys, and enthusiastic support from city council, school board and parks commission members, it is clear that community health and nutrition are major priorities.”

In addition to the trails, both City Heights and Rena have fitness equipment onsite.

“It is designed to help break up your jog and allow users to perform muscular strength and endurance workouts,” noted Cone.

Butterfield received a new fitness park this past summer. On weekdays, students use the equipment to perform simple strength exercises and resistance training. The park also has proven to be a popular spot among community members, with many local residents using it after hours and on weekends. The park has 15 fitness stations, including a four-way leg press, tai-chi spinners, exercise bikes, ski walkers and two-way chest press.

VBSD also partnered with the Boys & Girls Club of Van Buren to complete a gym renovation at the youth facility. A new floor was installed in the gymnasium, as well as wall pads at each end of the basketball court.

“Many of our students utilize the Boys & Girls Club for sports and after-school activities,” explained Cone. “It was a win for all of us, as our students and the club mutually benefit from having an upgraded practice and game facility.”

The recent installations were among many the district has completed in the last several years using JUA grant program funds. To date, the school district has seven trails and fitness areas on its campuses funded by JUA grants totaling nearly $350,000. Funds come from the Arkansas Department of Education through Tobacco Excise Tax appropriations and require that applicants partner with a non-profit organization to facilitate the projects.

The trails system is an important component of the district’s overall wellness plan, which focuses on student and staff health. Van Buren is proudly designated as a Coordinated School Health (CSH) district by the Division of Elementary and Secondary Education. The additional trails will help VBSD further promote the importance of physical activity among its students and staff, a key component of the CSH model.

“Maintaining a healthy lifestyle is important to overall student health,” explained Cone. “Having trails and fitness stations on campus encourages our students to get moving and promotes exercise as part of a daily routine. Our goal is to promote wellness in our culture and community, so we invite families to utilize the facilities, as well.”

In continuing with its trail expansion, Van Buren has plans to construct five fitness stations along the existing trails at Central Elementary School and Freshman Academy.  A large fitness course will also be installed on the grounds of the high school, adjacent to the district administration building.

VBSD is grateful to the JUA grant program and to the civic and nonprofit partners who have helped make the projects possible.

“The City of Van Buren has been a big supporter and partner for many of our installations. We are also grateful to those at the c­­ounty and the Boys & Girls Club of Van Buren for cooperating with us on our most recent endeavors. These trails benefit our entire region and we are proud to share these resources with the community.”

For a list of trails and VBSD wellness opportunities, visit vbsd.us/parents/existing/vbsd-trails-system.