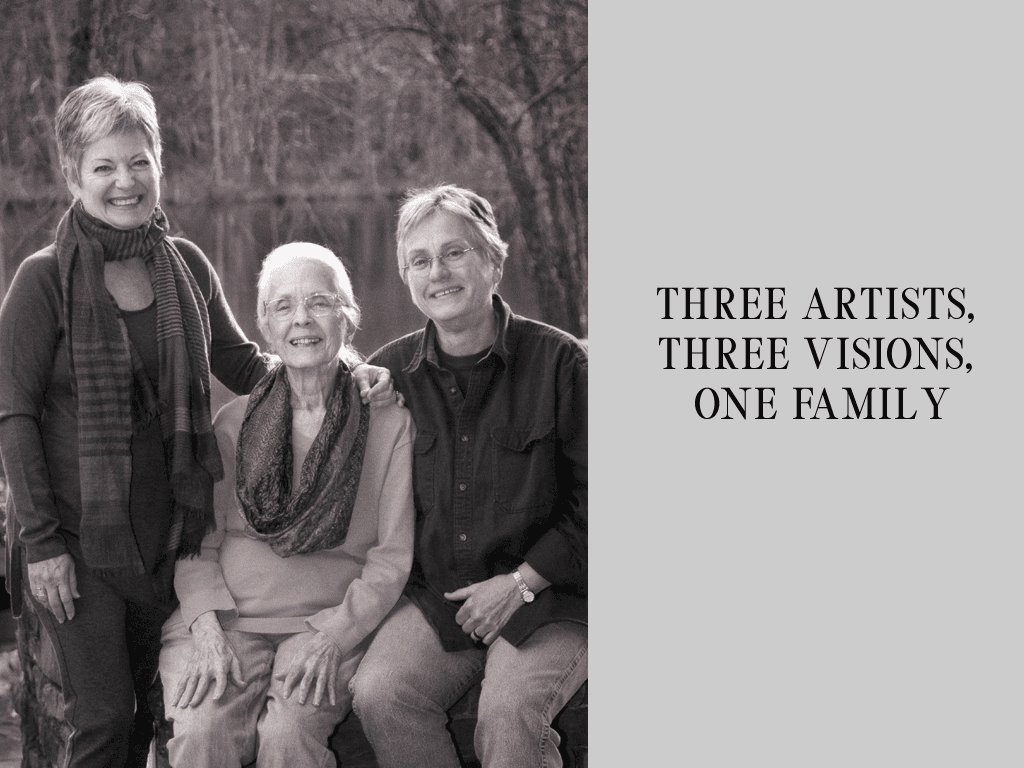 Fort Smith Regional Art Center is closed at present in the interest of public health. Enjoy this article and plan to see the exhibit when RAM is opened to the public again.

All mothers find, through experience, that her children will become individuals. At 95, Dede Hutcheson has had the chance to see how different her daughters Karen and Robyn would be from her and from each other – and still to share a bond with them, through art.

When her three children were young, Dede was more than a little busy as a mother and helping her late husband, William “Hutch” Hutcheson Jr., run a family-owned shoe manufacturing company and Lloyd’s Shoes, its retail stores, in Fort Smith.

Although she had taken an art degree before marrying Hutch, she turned her talents to utilitarian purposes when needed. “I’d get down on the floor and paint signs for the shoe stores,” she said. “I remember painting ‘Anniversary Sale’ on a really big sign and then realizing I had misspelled ‘anniversary’ after I stood up,” she recalled.

She also drew original designs for shoes when needed, Dede recalled, along with the other shoe designers, most of whom were men.

But whenever there was time, she painted for her own enjoyment.

“I was doing oil painting all the time they were young,” she recalled. It is still her main medium and she is always trying to learn more, she said. The drive to create and learn is a defining part of her nature.

“I can’t remember a time in my life when I didn’t have a pencil or a crayon in my hand,” Dede said. Growing up on North 13th Street, “I went to DuVal Elementary, which is not there any more. I still remember my second-grade teacher, Miss Cunningham. She let us draw!”

If there were art classes at Fort Smith High School when she attended, they weren’t memorable to her. When she went on to the University of Arkansas, its art department disappointed her.

“I think it was way up on the third floor at Old Main,” with an expression that indicates it wasn’t worth climbing the stairs to experience.

After one semester, her parents agreed for Dede to transfer to the University of  Tulsa. Her mother’s sister lived there and Dede’s uncle was serving in World War II, as were almost all college-aged boys. “It was kind of a girls’ school during the war,” Dede remembered. But while she studied there, the distinguished American realist painter Alexandre Pogue led the art department. A full, classical art curriculum was presented.

She painted landscapes on the campus lawn, en plein air, as it is called in art school. Later in life, Dede would do a lot more outdoor painting, of necessity as well as choice. After their shoe company became a part of Walmart, Hutch became an executive of the retail giant and had to travel across the nation and to Canada to make visits to stores. Together, they traveled many miles by car and Dede took along her oil paint box and her ever-present sketch book.

Often, while he was in meetings, she set up her easel and painted where they happened to be. “There were times he would stop and let me paint something that I saw from the car,” she recalled. She responded to the observation that she married the right fellow with a fond, “Yes, I did.”

They attained 70 years of marriage before Hutch passed away in 2017.  Together, they had increased their family’s charitable Windgate Foundation. Especially in the last decade, Windgate has made major gifts to art and education to a degree that is uplifting arts education in Arkansas now and for generations of students to come.

In this area alone, the University of Arkansas-Fort Smith Windgate Art & Design Building opened in 2015, drawing all the visual arts into one building. With well-equipped classrooms, studios for diverse art forms and light-filled galleries, it serves the entire student body and the public with access to the arts. Ongoing grants support more programs.

The Regional Art Museum is the beneficiary of a major Windgate gift to its endowment and for programming. RAM is open six days a week, with free admission and extensive free programming such as Saturdays for youth and a weekly open studio for figure drawing.

In Van Buren, the Center for Art & Education received a substantial matching grant to build Art on Main, a much larger arts center on historic Main Street. It will allow art education for a great many more children and adults and will have more programming.

Because she herself is a visual learner, Dede is convinced of the brain’s connection between seeing and making art and all other kinds of learning.

“I learn by sight. If it is explained to me in a book, sometimes I can understand it. But I have to see it. There are such different ways that people learn,” she said. “I think more people are visual.”

Fort Smith Public Schools has been given the former Hutcheson Shoes building, which will become its new Peak Innovation Center. It will offer specialized training leading to higher education or direct entry into advanced manufacturing, health care and information technology.

Dede loves to take painting workshops. She also has regularly sketched along with other artists at the free “Drop in and Draw” studio at RAM. A live model poses for figure drawing.

Jane Owen, director of the CAE, first took Dede as “another normal student, learning and improving her skills,” at workshops with artists/teachers George Kountoupis, Tony Couch and Charles Peer. Owen had no idea the pleasant, earnestly working woman at the next easel would also become a major donor to CAE.

Dede is studying, right now, a lesson on use of negative space, given by a favorite teacher and artist, Peggy Kroll Roberts. Dede subscribes to lessons online and has also studied with the artist in on-site workshops.

Too modestly, Dede doesn’t think her own paintings are significant to the pantheon of art, but she deeply loves the process itself and highly prizes what making art for a lifetime has given her. Valuing that almost indescribable artistic process is what she knows she does share with her daughters and her son, who didn’t become an artist but whom she knows has artistic talent. She sees a love of art in several grandchildren. Their work makes a third generation of artists exhibited in her home.

“We are all totally different,” Dede said of herself and her daughters. “Karen kind of slaps paint on – and I like it. Robyn is more lineal, kind of. She has something in her that’s like what I have. I want it to be like its supposed to be. But how she does sculpting – I can’t ‘get’ that because I wouldn’t have any idea how.”

What they know they share, Dede said,  is this: “You get lost in it. You’re so concentrating, you don’t know what’s going on around you. We all keep talking about it, all the time. We don’t know what we’d do without it. It gives us so much pleasure in so many different ways.”

A Love for Making Things

I think all three of us respect the others’ works and appreciate what they are doing,” Robyn Horn said of her mother and sister. “It’s rather nice that none of the work is redundant so that you can tell by looking at each piece – if you are familiar with us at all –  which one of us made it. The connective tissue is certainly a love for making things, painting things and enjoying creativity.”

Robyn is a nationally noted artist in wood.  She will exhibit here from a series in which she assembles pieces that make use of asymmetry and heavy textural qualities.

“I think in terms of wood and stone, of the things of which nature is made, of the ease with which nature develops into shapes and forms, created throughout centuries of accumulated time,” she wrote in an artist’s statement.

Some of her work requires a crane to lift it, such as an massive wood sculpture called Already Set in Motion, a permanent outdoor installation at Crystal Bridges Museum of American Art. Robyn lives in central Arkansas with her husband, John Horn.

A Bond Between Us

Abstracts in acrylic paint are Karen Hutcheson’s current work. Now living in Florida in retirement with her husband, she wrote about being in an artistic family:

“I think our common interest in art has created a bond between us that helps us understand each other even when we don’t always agree on everything. It’s something we can return to again and again. I also think we express ourselves through art in three very different ways which keeps things interesting. We all have distinctive styles. I think Mother and I are in awe of Robyn’s sculpting abilities and the way her mind works, bringing a drawing on paper to life in wood.”