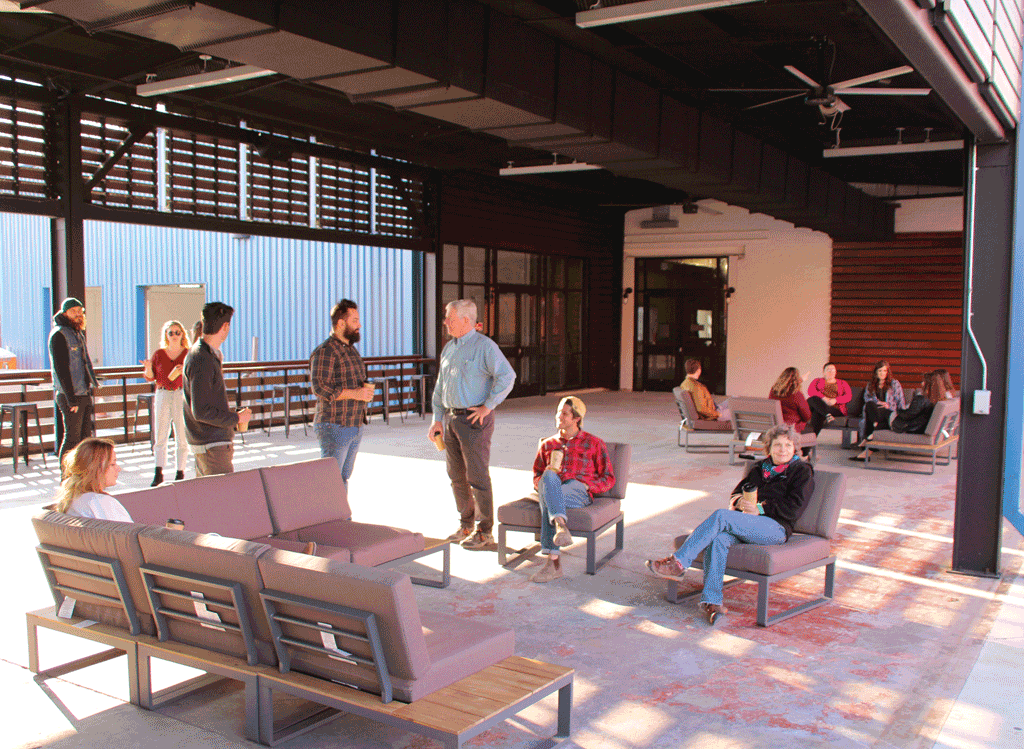 The Bakery is reinvented as a gathering place

Griffin Hanna, who has been managing the restoration of Fort Smith's 1921 Shipley Baking Co. building, is eager for people to see how the former Holsum Bread bakery has been brought to live again.

He describes it as “a multi-tenant use space that complements each other, where each tenant works together to create an atmosphere of openness and fun for the community.”

When Bill Hanna, Griffin’s father and president of Hanna Oil and Gas Co., purchased the former Shipley Baking building at 70 South 7th Street, it was initially meant to cure an eyesore. The building had been abandoned for more than 10 years and was a discouraging sight when viewed from the Hanna Oil & Gas building across the street.

Bill remembers it as a hub of activity – bread trucks and employees coming and going, amid enticing aromas of freshly baked bread. He said it may have been the contrast of those fond memories with the idle, darkened building that drove home the urge to save it.

They purchased it as is, with all the baking equipment still in place. As father and son began making daily explorations inside, they developed an emotional attachment. They began entertaining possible uses for the building, but the first step was to clean it out. From the start, they agreed they didn’t want a complete facelift. There was a story behind the chipped plaster and exposed brick that the Hannas wanted to preserve.

One such feature was the fire door for the freight elevator. It had been rigged with a counterweight that was strung with a rope. The theory was that in the event of a fire, the rope would burn, the weight would drop, and the door would slam shut. They preserved that setup for others to enjoy.

As rooms were cleared, the Hannas allowed a few non-profit groups to hold meetings in the space. Fort Smith Museum of History asked to use the facility for its 2017 Pardi Gras fundraiser. The crowd embraced the building and the Hannas knew they had discovered its purpose. It was meant to be a place where the community came together.

To that purpose, Griffin began managing Phase I of  The Bakery in 2018. The Collection Room Event Center was the first project. Griffin renovated the 8,000 feet main room, always careful to retain the raw character of the building.

They signed Kevin Dorey’s 7th Street Catering to cater the center’s events. He is also the owner of 21 West End.

With a full-service kitchen on-site, Dorey is able to provide catering to all three of the event areas. Chef Paul has prepared a unique menu for the 7th Street location. Dorey is also in discussion to operate a pub room the Hannas plan to add to the cluster of tenants.

When another of Bill’s sons, Tom, returned to live in Fort Smith, he joined Griffin for work on Phase II. Soon, their brother Sam was involved as well.

As three generations of Shipleys operated the original bakery, the Hannas liked carrying on in family tradition. Bill believes these Millennials added the right youthful vibe to the project.

Fort Smith Coffee Co. has also joined The Bakery community and plans to create a second location, featuring a full coffee shop and roastery. They will serve their fresh-roasted brews at the April 1 grand opening.

The Hannas are open to finding several more tenants who can contribute the right elements to the mix.  They’re currently in discussion with University of Arkansas-Fort Smith to convert the second floor of the building into a business development and family enterprise center.

The initial design work included the possible addition of condos in an adjacent building.

The grand opening be celebrated with live music, an assortment of beverages, ping pong and bocce ball on an outdoor court.

From comfortable seats on the 5,800-foot outdoor patio, guests can socialize or admire the 360-degree murals painted by internationally renowned artist Hilda Palafox. She covered the bakery’s pair of 30-foot silos during the 2019 Unexpected Project.

Three event center rooms of various sizes will be open so grand opening visitors may consider reserving them for weddings, meetings or events.

The rugged bakery walls have become a gallery for local artists. Enlarged black-and-white photographs showing the original baking operation provide some homage to the Shipley family and historical background.

Restoration of the old Shipley Baking Co. neon sign, depicting a loaf of Holsum Bread, is under way and may be complete for the opening. The Fort Smith Museum of History released the sign in favor of seeing it lighted again.

The Bakery District is a place of history that has become the future.

The Bakery District becomes a gathering place
Parties, events, meetings and wedding replace bakery equipment.
New and old together
Unexpected artist Hilda Palafox's 360 silo murals and the weather interior of the bakery.
Relaxing outdoor area
A bocce court, fire pits and covered patio invite visitors outdoors.
History remembered here
An elaborate vintage poster of the Shipley Baking operation and many staff pictures are displayed.
Covered patio area
Casual, relaxed seating on the patio of the Bakery.
Actively fun
Ping pong tables are at the ready for a tournament or just for fun.