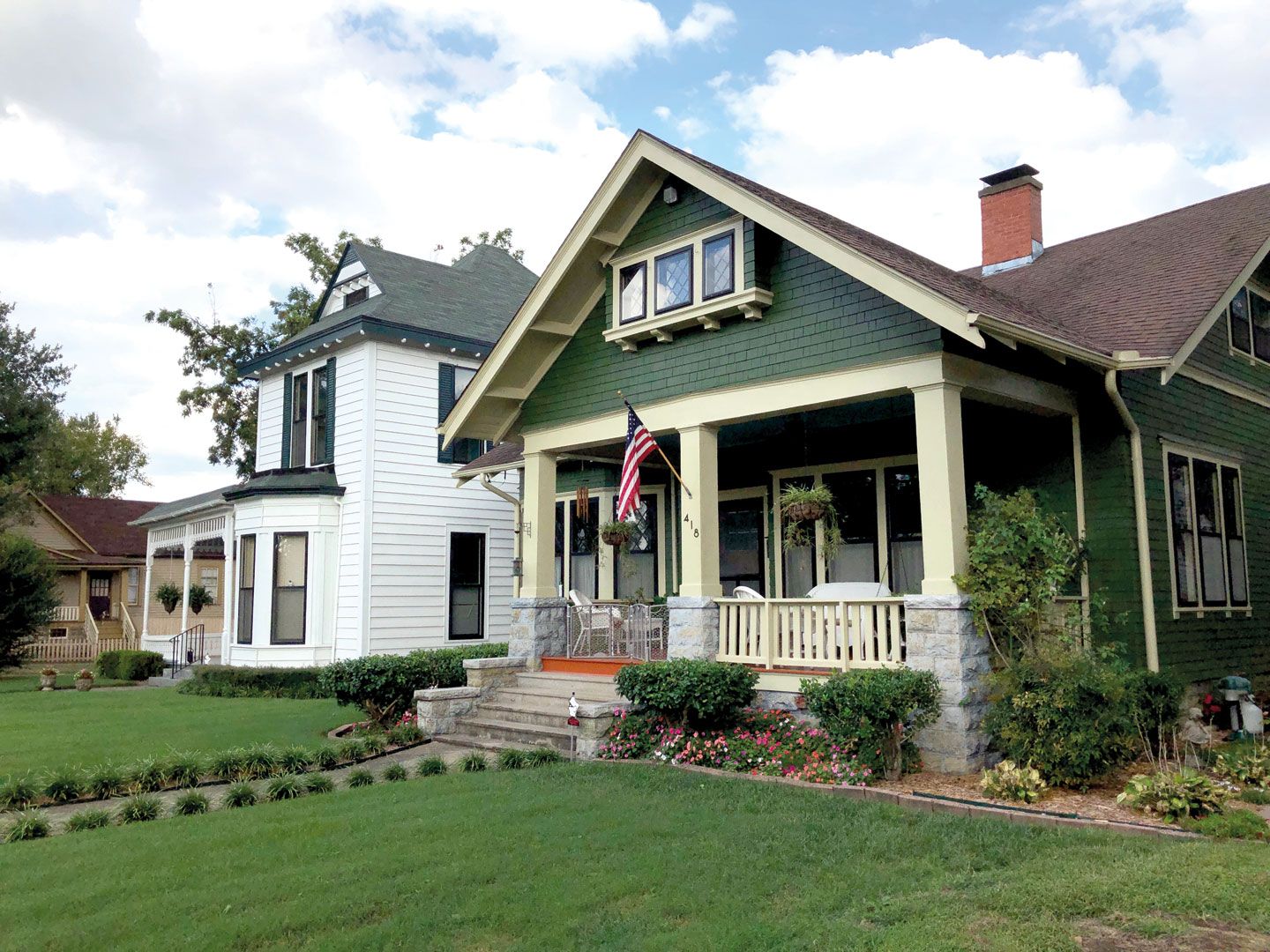 It’s the best neighborhood in the Historic District, or in town – according its residents

In the past few years, there’s the most wonderful sound in the Belle Grove Historic District - hammers and electric saws. All along North 7th Street, renovation and restoration is ongoing or just receiving final touches.

When Entertainment Fort Smith leased 316 North 7th Street, we had lovely but very quiet neighbors on a street of beautiful, historic homes and buildings. Ours, a converted home, belongs to and is beside the historic Bonneville House, a queen of the district. It has been, and is now, exceptionally well cared for.

Now, from North B Street for many blocks, almost every address is lived-in, loved, lively and refreshed, or getting that way fast. At the moment, a hero to all on 7th Street is Justin Skinner, literally a savior of two of the most endangered homes in all of the historic district, plus a third that really needed the love.

All are in the 400 block. One, currently home for Justin and Holly, had burned substantially while unoccupied. It seemed hopeless. The other (seen on the cover) had been boarded up for several decades with rain pouring through its collapsing roof.

Skinner took them on as investment properties, something he spoke about at the recent Invest Fort Smith seminar held by 64.6 Downtown. Using courage and construction knowledge, he has or will soon have converted two of them into income-producing rental units. Each can be restored to single-family homes, he said, “basically by unlocking a door.” Following current code while obeying historic preservation regulations has not been an obstacle, he said. As most historic renovators would agree, these homes were well-built, mostly by master craftsmen. Many times, a repair need only follow the original builders’ sound construction principles. Modern insulation, however, is an improvement.

It’s not just an expression to Clifford Culpepper, a Fort Smith native who retired early and returned home. He has long had his eye on the unusual Craftsman home at the corner of 7th and C Streets, with its tile roof, stained glass and deep eaves.

“I grew up on 7th, near Howard School,” he explained. “My first job was at the Bonneville House, as a dishwasher. It was used then as the Red Cross headquarters. I came here to get my lifeguard certification when I was in high school.”

Clifton recalls when renters lived in the Clayton House, which was a ­­down-on-its-heels rooming house before several women, led by the late Julia Yadon, Coe Koenig and others, worked in the 1970s to establish the Belle Grove Historic District and encourage its preservation.

He learned about the Craftsman style while studying architecture at Northside High School (Class of ’81) and liked this house, built in 1908 by wholesale liquor merchant Win Harper, more than any other.

After a career with American Airlines, living in Dallas, San Francisco and Chicago, he became considerably more interested in retiring to Fort Smith when he learned ‘his’ house was on the market. While still living in Chicago, he gave an application presentation to the Historic District Commission for his renovation plans and got them approved.

He was devastated when it sold instead to another buyer, but he persisted and purchased it from them. He was able to obtain, with the purchase, four original, framed drawings of his house, “elevations,” by the architect.

Clifton has been living in the house while restoring it and is “only” six downstairs rooms away from being finished, he chuckled. He has two bright and highly accomplished kids making their way through college and beyond who may have a place to sleep “by Christmas,” he said, as if convincing himself.

But he is right – the hardest work is almost done. Each window that had to be repaired had 18 separate pieces, he noted. “The biggest challenge was finding proper help. People don’t seem to know about anything about wood.”

Acting as his own contracter, he has found the right craftspeople for most of the skilled restoration work. Not claiming to be a carpenter himself, he has learned a few principles, such as never throwing any original milled wood away, but to save it for re-use or for the correct pattern for reproduction.

Clifton has also been inspired to make at least one original and appropriate addition to his home – he designed Wright-style ornamentation for an attic hatch and had it constructed, stained and installed. He’s pleased. He has also found at least one secret panel that contained the key to a safe that was once in the home. He can’t resist designing in a few more – but he won’t tell.

E Fort Smith pledges to do a complete interior/exterior when the renovation is complete. Clifton’s waited 40 years for this and is says he’ll be ready, “soon.”

Monte Smith, the wizard of preservation

In the Belle Grove Historic District, you need to know Monte Smith – he lives just around the corner on 8th so the commute isn’t bad to go to Clifford Culpepper’s house. The master carpenter has done so much specialty renovation work in Belle Grove that his touches can be seen on the exteriors of many homes.

Monte just knows things, like what the Bonneville House back stairs (seen at left with Clifton’s home in the background) should look like, or how to repair or reproduce the balusters on the Bonneville porch – and roof. He has applied his skills to the interior and exterior of many homes on North 7th and 8th Street, including the ornate, Eastlake E.C. Haskett house at 312 North 8th, circa 1882, for which he recreated by hand many “gingerbread” wooden ornaments.

When opportunity has presented itself, he most enjoys original design work such as the outstanding restrooms he created at the Fort Smith Museum of History, incorporating period-style millwork and museum images.

Not every home has to be renovated

North 7th Street, like other streets in the Belle Grove Historic District, has a mix of homes in different states of repair and decor. Some residents do their own “This Old House” epic restorations. Others buy homes put in good shape by a previous owner’s efforts and become stewards of a already comfortable historic dwelling.

The family of Talicia and Jay Richardson, after living away from Fort Smith for years, moved into one of 7th Street’s most appealing homes precisely because of work that had been done by earlier owners.

Talicia leads 64.6 Downtown, a non-profit organization that presents the Unexpected art festival and through its Propelling Downtown Forward initiative, encourages investment and innovation in the city’s legacy center for business, banking, law and entrepreneurship. She serves on the Fort Smith Public School District’s school board.

Jay serves as state representative to District 78 in the Arkansas House of Representatives. Both enjoying making their home in one of Fort Smith’s most venerable, historical neighborhoods. The Richardson home is at the center of an annual block party for neighbors and the students of the Future School of Fort Smith, a charter school.

The deep, shady front porch of their Prairie Style home is a comfortable gathering place. Their large lawn is an adventureland for their son.

Everyone re-decorates eventually, but Talicia says they chose their home for its already-livable comforts. The family is a familiar sight, walking together to a downtown event or restaurant. She has a short commute to her Garrison Avenue office.

Mila and Dan Masur had never been to Fort Smith or even to Arkansas when they first came for Dan to have a job interview.

She had browsed through real estate listings before visiting and “on a fluke” they drove down North 7th Street. When they found 414 North 7th Street for sale, they “fell in love at first sight” with the circa 1906 Victorian home with its wrap-around porch.

“We hadn’t been in town 48 hours before we made an offer,” she said. The home was ready to move into, well-renovated by the sellers. “It had been worked on and cared for,” Mila said.

Dan, after a career as a Marine, accepted that job. Mila has become the director of the nearby Clayton House, Fort Smith’s Victorian “house museum.”

“Here’s how much we loved this house,” Dan explained. “That was next door,” he said, gesturing to the house their neighbor Justin Skinner is now bringing back to life.

In 2016, it was in its worst shape of all time, with a roof open to the sky and all its windows and doors boarded over. The Masurs couldn’t know an investor would soon come along – or if the house would fall in before it was repaired.

“Justin has this looking great,” Dan said in true appreciation.

They are delighted with the energy rising on North 7th Street today and they often greet their neighbors from that wrap-around porch that caught their hearts at first sight.

Tour the Belle Grove Historic District
Guided or self-led tours start from the Clayton House.
Long-time 7th Street Love
Wully and Shandrah Bremner own two adjacent, lovely homes and have enjoyed living here for almost 20 years.
Three saved and counting
Justin and Holly Skinner, in front of their home, have saved two of the most endangered homes in all of the historic district, plus a third that really needed the love.
The original front porch lifestyle
The Bremners have two of the most appealing front porches in the historic district.
Love at first sight
Here for a job interview, Dan and Mila found and purchased their home within 48 hours.
Ask Monte
Master craftsman Monte Smith has had his skilled hands on numerous restorations in the district.
The gathering place
Jay and Talicia Richardson brought block parties to 7th Street and connect all the neighbors.
Saving a neighborhood
The Skinners on 7th Street's brick pavers with two of their projects in the background.
It's always been his
40 years ago, Clifton Culpepper decided this would be his house. Now it is.