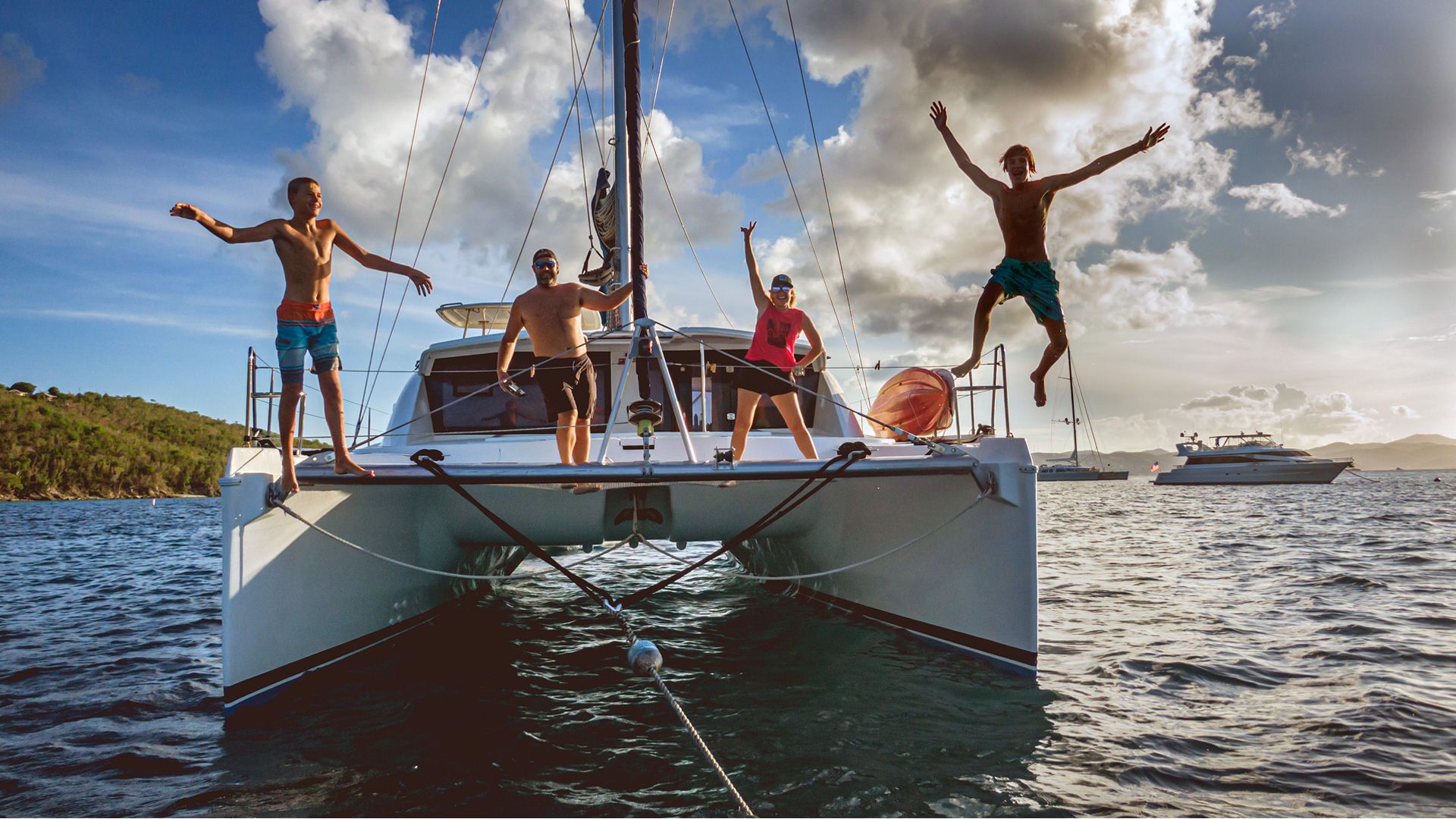 In January 2020, the Pruitts of Fort Smith planned to set sail for six months, starting from the U.S. Virgin Islands. Susan and Clay Pruitt hoped to share an adventure of a lifetime with their sons, Denver and Hudson.

An epidemic of a new illness had begun to spike the news headlines, with reports it was spreading to Europe and the U.S. The Pruitts were aware it emerging at the time, but the threat, then, seemed remote.

They decided to sail on.

Back on dry land, at home since July, they’re happy they did. Living aboard a sailboat put the family in a “bubble” they could control – sailboat, water and sky, with careful trips ashore for supplies.

“We were in the islands when the U.S. first shut down,” Clay said. Their home harbor was Cruz Bay, the main town and port of St. John, the smallest of the three U.S. Virgin Islands. St. John is reached only by water.

St. John is east of Puerto Rico in an archipelago that includes the British Virgin Islands, a short hour’s sail or ferry ride away. However, the borders of those nations and territories were closed by their governments.

When ashore on St. John for supplies or recreation, they obeyed local public health policies, which over the six months included cycles of precautionary shutdowns and limited re-openings. Essential services remained available, with restrictions. Tourism slowed to nil at stretches.

Their original plans for sailing to the island countries of Dominica and Turks & Caicos now prohibited, the Pruitts embraced the beauty and almost limitless adventures they could enjoy within the U.S. Virgin Islands.

Sail on, sail on, sailors
The Pruitt family's six month sailing adventure
Meet the crew
Denver, Hudson, Susan and Clay
Where in the world
The U.S. Virgin Islands are in the Caribbean
Young men of action
Denver loves rock climbing and Hudson holds onto a tube like a barnacle
Captain Clay and First Mate Susan
Clay loves underwater and Susan likes exploring the shore
Underwater universe
Slip under the surface to endless fascination
Brush with fame
They got thanks for a courtesy given to Kenny Chesney, fellow sailor

Even these gorgeous photographs fall short in showing the fun they had. But Clay, a professional videographer and documentary filmmaker, did capture the spirit and spectacle of their experience in a series of outstanding video highlight episodes titled “Tales from a Passport,” a record he made for his family but shares with the public on a YouTube channel.

Thanks to Clay’s talent, viewers can vicariously sail, snorkel, scuba-dive, boogie-board, fish, swim and walk serene beaches. He has expertly captured both the action and tranquility in which they were immersed.

Discussing their Caribbean getaway a year after they cast anchor, Clay and Susan feel lucky it all worked out. In ways they were prepared, Susan explained, as they had a decade of sailing experience. They had also attended a sailing school,Cruisers University at Annapolis, Md., to learn skills such as navigation and boat maintenance and repair. The school’s leaders were invaluable sailing mentors, giving guidance even after the training, she said.

“They were game changers, helping me make spreadsheets and plan.”

But in other ways, they could learn only by doing. They booked the trip a mere five weeks in advance.

“I saw this little tiny article about long-term sabbaticals and had told Clay,” she said. “I had been gone and had been working a lot. I came home one day and he said ‘by the way I booked a boat and we’re going in five weeks.’ But I’m glad he did. I might never have pulled the trigger.”

Susan is major gifts manager for the Ronald McDonald House Charities -Arkoma. The chapter offers home-like lodging for parents whose children are in critical or long-term medical care. First established inside Mercy Hospital Fort Smith, it is expanding. In 2021, a new, free-standing and much larger facility is under construction.

Her desire to help is hearfelt. Their own youngest child, Lily, lived 128 days after her birth in 2010. Following Lily’s short life, Susan discovered she had breast cancer. Treatment helped to her recover in 2014.

Susan and Clay embrace life in their child’s memory and with the experience of enduring life’s fragility. Their teenaged sons are reaching the busiest times of their academic and social life. It was really now or never.

She made lists of what to take, from can-openers to emergency medical and dental kits. With very limited space and weight limits, the adage for onboard living is to take little – and pare it down to even less. “Now I think I would know how to take just a carry-on bag,” she said, laughing. Trial and error have taught them what to leave ashore. “We didn’t wear shoes!” Clay said. We wore the same thing over and over,” Susan added. “You didn’t need a lot!” You need the right things.

“We really learned a more minimalistic lifestyle,” Susan said. While in the islands they lived aboard two catamaran sailboats – starting with a 40-foot and trading up to a 48-foot, both leased. Each crew member had chores and duties. Living constantly so close together, the family had to be responsible for and kind to one another.

Away from their home harbor, most computer devices did not have a signal. The distractions of the internet were brief and specific, they explained. When in port, the boys would hop on the free Wi-Fi from the big hotels to talk to friends or download lessons.

All the while, the brothers kept up with their school work, under Susan’s supervision, including homework and tests.

On one Tales from a Passport video, Susan talks about “Adventure Schooling,” her concept of making every day into a learning experience. She details one day when she turned a hike into “a history lesson, a math assignment, a literature reading and even a cooking class.”

They were exploring the circa 1780 Annaburg Sugar Plantation, a historic site on St. John. From it, they could see Norman Island, thought to have been the model for the location of the classic adventure novel, Treasure Island, by Robert Louis Stevenson.

“So guess who got to read the book and give an oral book report? My kids.” “Hands-on learning is often the best way to never forget,” Susan said. “And it is so much fun, I don’t even think they realize how much they’re learning.”

Hudson and Denver shared some adventure school experiences with new and now lifelong friends who also were from sailing families.

Strong bonds grew between other boating families as the Pruitts introduced themselves to kids and other parents in port. They evolved into a clan of “boat people” who enjoyed sailing and exploring new places together, with cookouts, conversation and mutual support.

Clay is forever in debt to boat friends who helped with mechanical repairs, especially when he accidentally “dropped” an outboard motor into the depths. They’ll never forget beach meals made by a friend who is a chef. Many happy days and nights, they moored in island coves with one or two other boats, enjoying the sea and shore together. Some people they met live aboard year-round. These friends will sail together again, they all vow.

Under the sea and on the editing deck

Besides islanders and sailors, there is another, hidden, society. Plunging under the surface in a mask, whether free-diving, snorkeling or in scuba gear, the living inhabitants of the sea were endlessly fascinating to the Pruitts. They swam with colorful fish of the Caribbean, sea turtles, rays, eels, coral, mollusks, starfish and saw a stunning universe teeming with marine life. The gear Clay took included waterproof enclosures for his high-definition cameras and the “Tales from a Passport” videos have spectacular underwater footage taken while exploring sunken shipwrecks to several shark encounters, including a rare hammerhead shark. (No ocean creatures were harmed and no humans chomped on this trip.)

Sailing across the surface or watching waves hit the sand are wonderful experiences. But Clay found a deepening love of diving. He shot hours of compelling underwater video, which is found in many segments of his series. His footage speaks more eloquently than words and the viewer feels his joy and wonder.

Keeping up with his video journal was arduous. He edited all through the six-month cruise. Each of the more than 30 videos is 6-10 minutes long. Clay learned that highlighting each subject with minimal narration was enough – good visuals tell the story. The outstanding series is just for enjoyment. He has no commercial plan, but they are of broadcast quality.

As they left for the islands, Clay had just completed “The 24,” a documentary of the annual 24-hour extreme rock-climbing challenge at Horseshoe Bend, Ark. A Fort Smith premiere was held by the River Valley Film Society and it had been screened at the Fayetteville Film Festival. It can also be seen on YouTube. So his island journal was supposed to be fun.

The videos will be a treasure for Denver and Hudson, who will never forget their aquatic half-year. When they returned, they slipped fairly easily back into life on land, Susan said. They seem be into what they are doing, whenever they are doing it.

In their dad’s videos, when Denver and Hudson narrate the account of reeling in a really big catch or describing how exciting it is to hang on to a tube pulled behind a speeding boat, bouncing across its wake, you can tell they’re young men of action, not words. Like most kids, they live in the now.

Getting back their land legs and attitudes was a little slower for the adults.Susan and Clay have even gotten away for one more sailing adventure since their return - helping to move a sailboat from Charleston, S.C. to St. Thomas, a 10-day passage. “Water’s a part of our life,” Clay said. They both know they will sail more in the future.

Susan admits, “I catch myself always trying to find something adventurous to do. I’m searching for things to fill that sense of adventure that we had. Every day was something amazing. When you get back home, the daily grind can be difficult,” she said. “It’s called swallowing the anchor.”

“I can’t talk about it,” Clay said, “I’m getting choked up.” He knows that those six months are special and will never happen again just the same way.

“On the boat, you’re always in close proximity with your family. We spent every day and night together for six months! There are chores and school and work, but every day you’re jumping off the back of the boat, swimming with turtles, seeing sharks, doing things you might only get to do once in your lifetime.”

But nothing will be exactly as it was on that 2020 cruise, he explained. It’s why he’s so happy they did not opt to cancel it.

“With the pandemic beginning, we struggled and then went with our gut decision, hoping it would be the right one,” Clay said. “As it turned out, where we were was the best place in the world to be.”