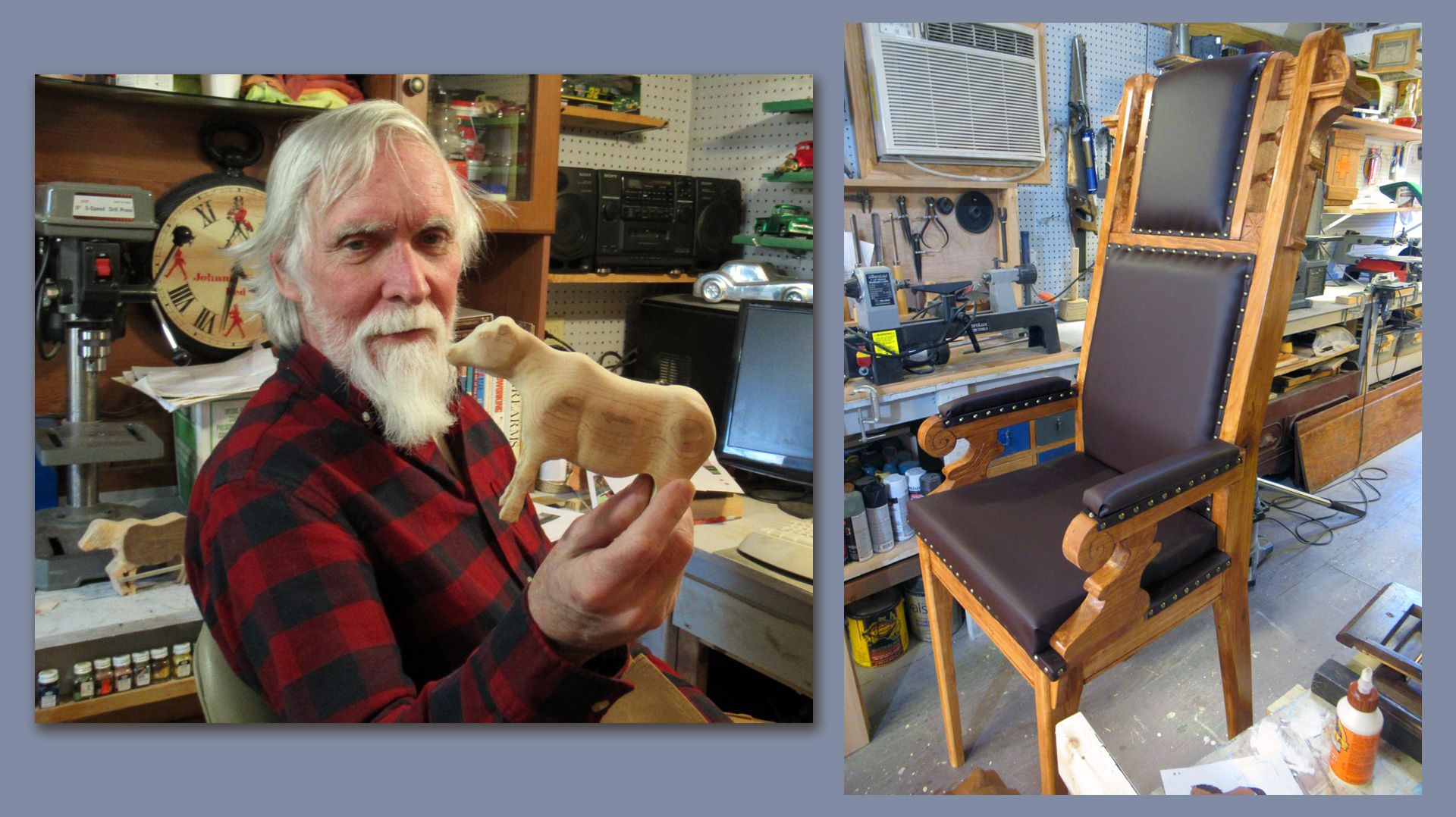 Floyd Robison, known as Sonny to his friends and family, has a reserved demeanor and very much resembles the famous jurist, Judge Isaac C. Parker, whom he often portrays for educational programs and events.

With his long, white hair and flowing beard, dressed in a late 19th-century black suit with a salamander stickpin, it is possible he’s a little scary to the schoolchildren who meet him on field trips to the Fort Smith Museum of History – until they ask a question. Sonny’s kind eyes light up for kids and he always answers their curiosity patiently, engaging them at their own age level. He often will hand a child his cane or hat to draw them out and encourage questions.

Helping young people connect with history in a hands-on way inspires Sonny to use his skilled craftsmanship to make what is now an impressive number and variety of interactive installations that enhance the experiences of museum visitors.

Most people will not know that not only is he playing Judge Parker – he himself made the wooden gavel he can allow kids to hold.

Soon students will be able to bang that replica gavel from an ornately carved judge’s chair at a high, matching courtroom bench, Sonny’s most recent creations for the museum.

According to his wife Sue, who portrays the formidable Mrs. Mary Parker, designing and making educational installations is more in Sonny’s nature than dressing as the judge. She admits she initially put him up to the live Parker impressions. But he’d much rather “show” than “tell.” He’s the most contented when creating items in his snug, well-organized backyard workshop at their Van Buren home.

For some projects, Sonny works both at home and on-site to bring an installation to life. Hours of carving went into scale models of the oxen-drawn covered wagon, outfitted with a churn, leather and wooden tack, oak barrels and wooden provision crates. It illustrates the 1850 gold rush prospectors who outfitted here. As much time went into a keelboat model, for which he hand-carved and painted miniature crew members.

These models also can be taken to classrooms and libraries, where they fascinate kids.

But Sonny had action in mind for a skiff he made to scale so that kids could climb in and row the working, wooden oars secured in iron oarlocks. It attracts youngsters and adults alike to climb aboard and pull the oars, giving them an experience somewhat like that of the keelboat era. Its canvas sail can be raised and lowered. He always adds extra educational value. The skiff’s U.S. flag has the authentic number of stars and strips of 1817, the year soldiers arrived to establish the first military Fort Smith. Sonny made it, using cloth paint.

“We never know what he’s going to come up with – sometimes he just does it!” said Caroline Speir, executive director of the museum, who is ever-grateful for the extensive volunteer work of both Sonny and Sue. When another volunteer, Nancy Ahlert, helped to create a Victorian-era classroom experience, Sonny pitched in with tools and labor to make it all work.

Ahlert is a retired Fairview Elementary teacher who dresses and teaches as would have been done in the period. Visiting students can sit in desks and take lessons from textbooks and materials from Victorian times.

He and frequent volunteer Marcus Woodward built a raised floor to which the iron desks are bolted. For each desk, he made wooden slates on which students of the period wrote and ciphered in chalk. So they would be usable, he made them of wood with a modern chalk-paint surface. Each slate is tied to its desk with a jute cord. He also converted the teacher’s easel chalkboard to a usable chalk-paint surface. He made a wooden pail and dipper to show how students and teacher shared a drink, (strictly as a visual example).

He supported another outstanding museum volunteer, Carl Riggins, who created the fantastic “On The Air” interactive exhibit of local media history. Sonny custom-built a working anchor desk, with an authentic tv station logo. News cameras and lights that Riggins collected are set up around the desk. Many visitors take their turn as ‘anchor person’ on the interactive set.

The Parker era furniture is for teaching and programs. There is a full Court of the Western District of Arkansas room in the museum, but it is a display. Because of Sonny’s craftsmanship, visitors will be allowed to sit at his new bench. It can serve as a theatrical set for the historical re-enactment of trials that Sue helps to produce.

“If some kid breaks Parker’s replica gavel,” Sue said, “Sonny can make another one.” But they’re sure the child will never forget the judge to whom that gavel belonged.

Sonny Robison made it
From miniatures to furniture, this volunteer not only portrays Judge Isaac Parker, he created hands-on history tools.
Wagons ho
A model of a covered wagon departing Fort Smith for the Gold Rush
1817 Keelboat Model
Robison made this scale model of a keelboat such as the first soldiers arrived aboard to build the first Fort Smith.
A kid-sized skiff
To help kids understand rowing, a tiller and sail, Robison built this interactive attraction for the museum.
A touchable Parker's courtroom
From this replica of Parker's bench, Robinson can teach about the famous jurist of Fort Smith's federal court.
School days
Visitors to the Fort Smith Museum of History can learn in a Victorian classroom whose slates Robison made.