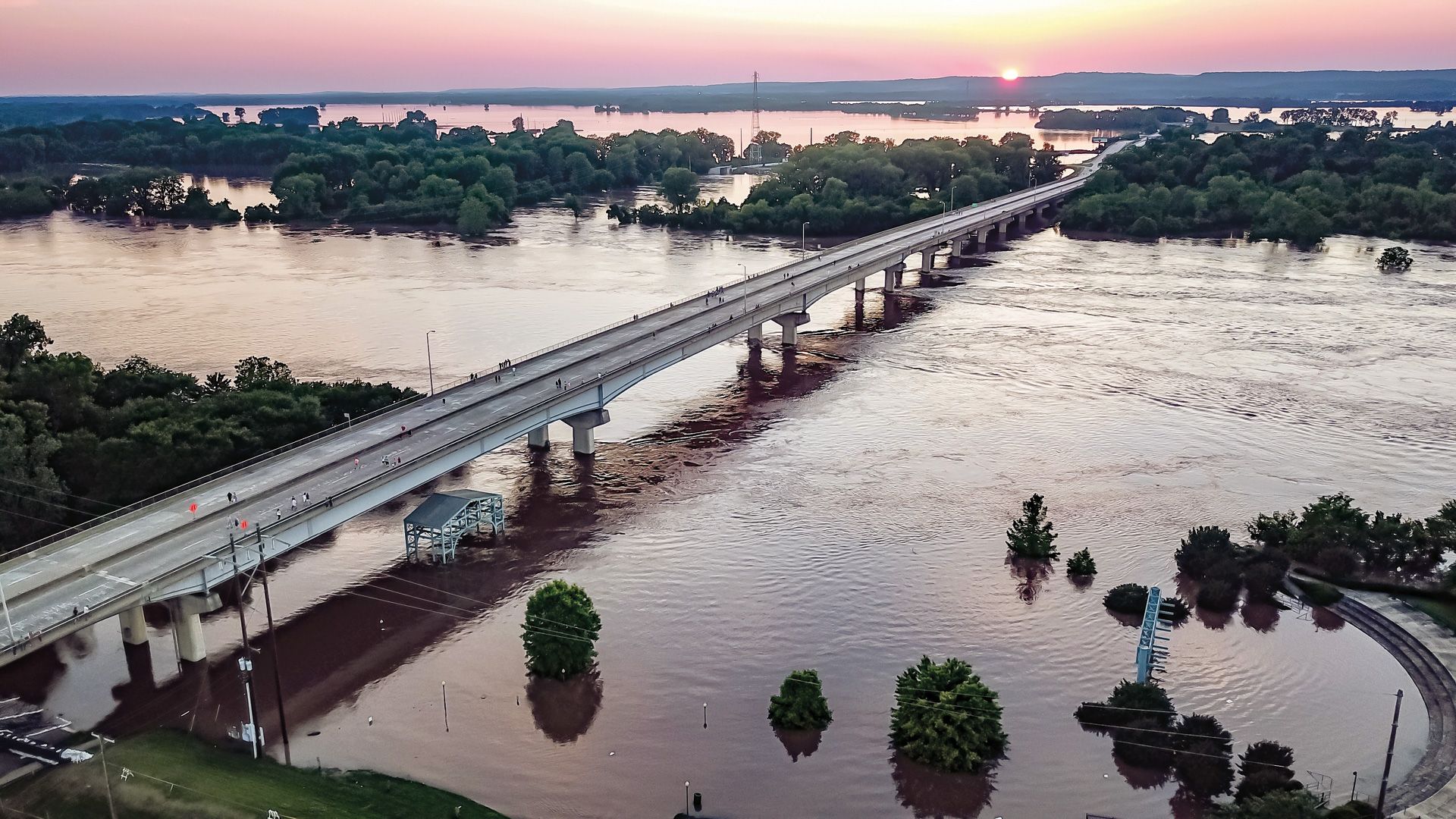 Who was that prolific eye in the sky over Fort Smith?

One photographer, however, drew an audience that swiftly climbed into the thousands, because he posted so many informative images. From the Garrison Avenue bridge and around the riverbanks of the peninsula upon which Fort Smith is built, his photos showed almost every neighborhood, street or building affected or threatened by water. They were  stamped “Austin Collins” and many had locations given in their captions. For comprehensive coverage, arguably, Collins surpassed every local media outlet.

It’s surprising to learn that he’s an amateur, not a commercial drone photographer. For 16 years he’s worn the uniform of the Fort Smith Police Department. It’s easy to understand from talking with Collins that his career in service made him susceptible to be moved by people who responded with gratitude or asked him to photograph their property. It was the reaction to the first image he posted that set off his marathon run of coverage, he said.

“I took a picture of Walmart on Kelley Highway, surrounded by water, and posted it that first Friday night,” he said. “My wife and I then went with friends but I was noticing the ‘shares’ and ‘likes’ go up, on my phone. They were climbing by multiples. I thought “does this mean I went ‘viral’?” he laughed.

People who lived near his Northside home “were who got me,” he said. “There were people worried about Roselawn Cemetery and their storage units in that area,” he said. Then floodwaters rose into residential streets. “People from all over the country contacted me about their childhood homes, their parents’ homes – they were worried,” he said. But the gratitude that was coming through, it got me! I felt like “I’ve got to!”‘

Flood photography ‘turned into another job,’ he said. He had clocked off the Friday evening when flooding started. “I had shared some pictures first, on my personal page, trying to keep people from coming downtown to look,” he said. “I said ‘don’t come down here, just look at my pictures.’ Directing riverfront traffic was keeping us, keeping the police, from being in other areas where we really needed to go.”

“That weekend, I had a friend drive me around. I had two battery chargers in my truck. I downloaded from my drone to a tablet, then I had to email them to myself.” He stayed up late many nights for a week, editing and posting photos. Viewership rose steeply.

But after that weekend off-duty, he worked 7 a.m.-7 p.m. shifts, patrolling flooded areas and helping residents. It left just an hour of light after work. “From the 24th to the 29th, I shot fast and posted every day,” he said. “But I was able to get the peak flooding.”

He tried to reply to the many online comments, almost all positive. “I made my friend and my wife administrators over the page just to help me keep up,” he said. He tried to fulfill requests, even one to look for a lost calf – but work hours and road closings made it impossible. His volunteer shoot needed boundaries.

His intent was to capture the flood’s reach, not to exploit the problems of property owners or residents, he said  – many of whom he met and tried to help while on duty.  “When the water receded, this was no longer photographing the historic flood, this was just people trying to figure out what to do next.”

The career law enforcement officer has an ongoing interest in freelance, still photography. Before the flood he had regarded drones more as a novelty and prefers shooting portraits, with conventional cameras. But this intense sprint of documentary photography was a service Collins felt moved to share.